Would you like to speak fluent Spanish? With the interactive and user friendly lessons, games and activities we've provided for you on this website you'll have all you need at your fingertips to get you there. The beautiful Spanish language came from an area called the Iberian Peninsula, what is modern day Spain and Portugal. We'll teach you how to speak fluent Spanish and make it an enjoyable and meaningful process as you do so.

"Hola Dave, Thanks for following up. I just thought I'd let you know how things are going. I've been studying regularly and I am having so much fun I don't want to finish the program. I have taken formal lessons and tried many different tapes and computer discs. Your system is better than any other language tool I have encountered. Its makes sense. The material is presented in a way that stays in my memory. I'm not just memorizing a bunch of rules and phrases; I'm really learning how to speak Spanish. Nos vemos."

The Visual Link® Spanish course was created by a Spanish instructor at a university who had became quite frustrated with how he was expected to teach the course. He was required to use a textbook that first taught some random Spanish vocabulary including colors, numbers, months and days. The text then proceeded to teach verb conjugation. This instructor became increasingly frustrated because he wanted to see his students speak the Spanish language which wasn't happening well under the current curriculum. The students also had a desire to learn to speak fluent Spanish, not just learn grammar rules and vocabulary.

The instructor made attempts over the next two years while teaching lower level Spanish courses to incorporate lessons and activities into his class that would encourage real Spanish language conversation. These activities didn't coincide well with the university's curriculum, however. As a result the instructor left the university to create his own business and Spanish language course - one that would help people actually learn to converse in Spanish from day one.

The methodology used in our current Visual Link® Spanish language course is a result of 15 years worth of research. It has been used to teach Spanish in hundreds of schools, homes, community groups and corporations as well as 130+ countries around the world. Hundreds of thousands of people have been able to achieve their Spanish language learning goals using the Visual Link® Languages methods. 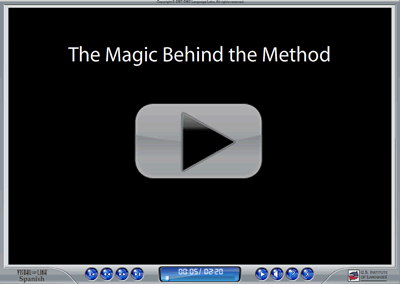 We take great pride in creating Spanish language courses that truly help people to speak Spanish. We hope you see our hard work and effort in the free lessons included on this page (look up above). Hasta Luego y que disfruten!